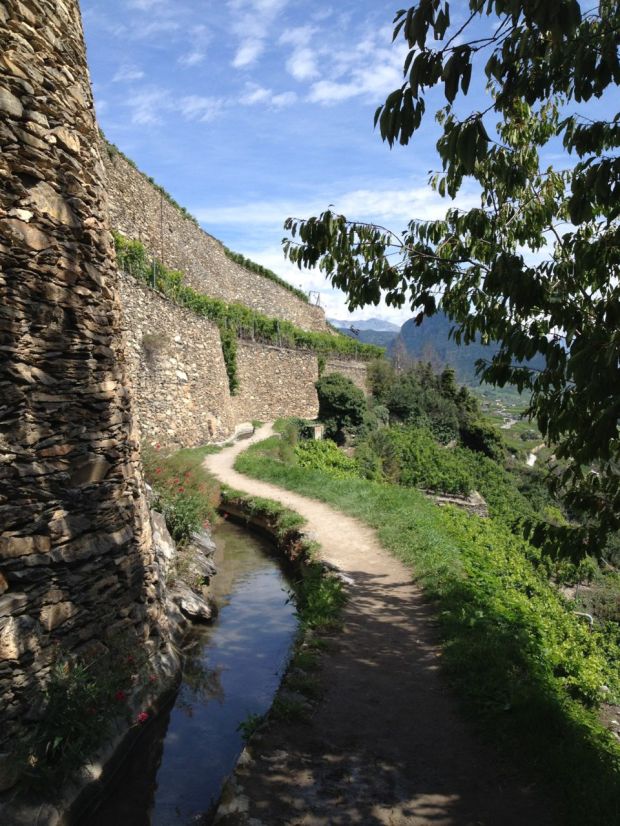 For our first week in Switzerland, we thought we’d start out with a few easy hikes near our base town of Morges. Located on Lake Geneva, in the southwestern part of Switzerland, Morges is close to many scenic hiking areas. The biggest challenge is deciding on which area you want to explore.

For our first hike, we decided to venture near the Jura Mountains, which are just a bit north of Morges. With our home exchange, we have the use of a car, which is very convenient for quick day trips into the countryside. In less than one hour, we arrived at the small town of La Sarraz, where we could hop the train to the start of our hike in Romainmôntier. We boarded the train with other hikers and bikers on a splendid sunny Sunday morning. 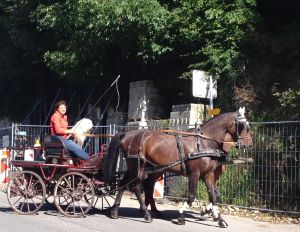 When we arrived at the stop in Croix, we realized that the local bus was not running on Sundays, so we decided to walk into town to see the beautiful old Abbey. We also had the option to start the walking trail a few blocks from the train station. But we were glad that we walked the short mile to the picturesque village of Romainmôntier. Just as we arrived, we spotted a woman with her best friend and her horse and buggy leaving the village for a Sunday ride. We then found an excellent bakery full of friendly locals and warm croissants. Just across the street we found the Abbey and explored the church and grounds before our hike into the woods.

The well-marked trail starts behind the Abbey and follows the Nozon River for most of the way. It’s paved for the first section, which makes it a popular path for bicyclists, too. But the path turns to gravel as it winds through farmlands with views of the countryside and the Western Alps in the distance. The path follows the rolling hills, but there isn’t much climbing on this trail. 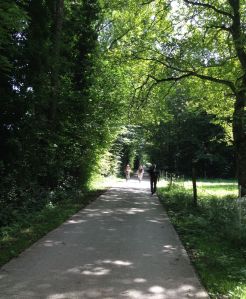 About halfway, we passed through a tiny village (without any restaurants) before we entered a small forrest with a beautiful waterfall. The entire walk is only about two and one-half hours before reaching the town of La Sallaz to return to your car or the train station. Without a car, it would be easy to take the train from Morges, Lausanne or almost any city in Switzerland. We ran into a couple who had taken the train from Bern for the day.

The town of La Sarraz has its own Chateau and a few restaurants. On a Sunday, not much is open, but there were a few spots where one could stop for lunch.

Another day we drove into the Valais Valley to the town of Sion for a different kind of hike.  The valley is famous for its irrigation channels, called bisses, which run along the steep terraces of grapes growing above the towns. These bisses also provide perfect hiking trails for the area. We chose the Bisse of Claveau trail which runs from Sion to the small town of St. Léonard. It was an easy 2.5 hour hike above the valley with views of the Rhone River and the Pennine Alps in the distance. Once we got up to the start of the trail (above the old city center of Sion), it was an easy trail. We walked among the vineyards on a well-marked trails as we admired the scenery. There were several wineries where one could stop for a tasting and a terrace view.

At the end of the trail, we had a steep climb downhill to the town of St. Léonard. This quaint town is known for having the largest underground lake in Europe. The lake is open to the public, with boat rides that take you on a guided tour. It was too nice a day to go into the dark underworld, so we decided on a cool beer instead.

Although it was quiet on a Sunday afternoon, the trains were running. We soaked up the sun and enjoyed our beers at the Buffet de la Gare, a cosy cafe just across from the station. 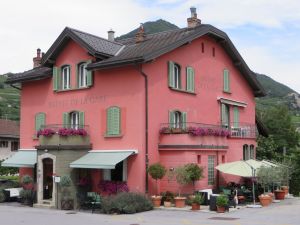 We took a short train ride back to Sion and explored the oldest city in Switzerland. Sion isn’t very large, but it’s quite a pleasant city, with a colorful, old town center. The pedestrian only street in the old town makes it a nice place to stop for a stroll and sit in a cafe and watch the world go by.

But, there’s a lot more going on in this town with four castles, four museums and fun events all summer long. Luckily, it’s close enough for a day trip. We’ll be back. 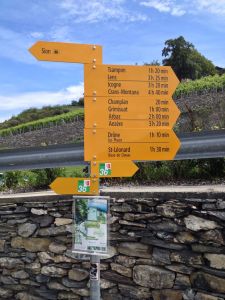 Switzerland has so much to offer anyone who loves the outdoors. The hundreds of hiking and biking trails are all well-marked. Here are a few resources on the web:

I am an artist, writer and desktop publishing consultant living in the Pacific Northwest. After our first visit to Italy, my husband Bob and I have found ways to spend more and more time there and other countries in Europe. We love to travel, but especially to stay in one area and get a better sense of place. I love learning languages, so I continue to study Italian, French and Spanish so I can communicate a bit more with the locals. Even learning the basic greetings can make a big difference.
View all posts by msraaka →
This entry was posted in Hiking, Switzerland, Travel and tagged day hikes, Jura Mountains, La Sarraz, Romainmontier, Sion. Bookmark the permalink.

4 Responses to A Few Day Hikes near Lake Geneva